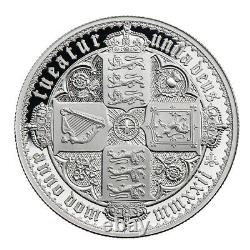 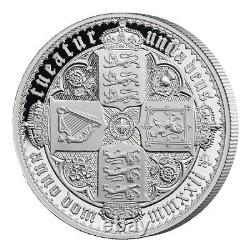 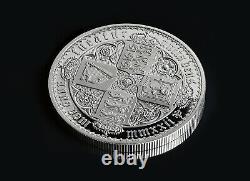 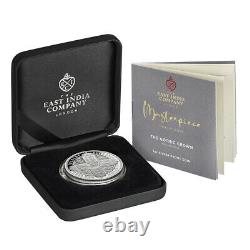 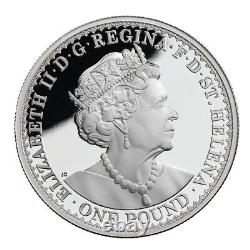 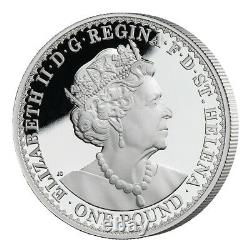 STRICTLY LIMITED TO ONLY 2000 COINS WORLDWIDE. William Wyon produced some of the most iconic coin designs of the Victorian era. His 1838'Young Head' portrait was so well liked by Victoria that it graced the coins of her reign for nearly 50 years. His 1839 Una & the Lion used characters from Edmund Spencer's medieval poem The Faerie Queene to represent the young Queen Victoria and the powerful nation under her control, and is widely regarded as one of history's most beautiful coins. In 1847, to celebrate the 10th anniversary of Victoria becoming Queen, a silver crown was released with a new portrait by Wyon. In a shift from his Neoclassical roots, Wyon's obverse design was influenced by the fashionable Neo-Gothic movement, and with a similarly styled reverse design by Scottish artist William Dyce, it became known as the'Gothic Crown'. This classic work of Gothic Revival art has now been faithfully remastered by our master craftsmen for the modern collector, available now as this limited edition 1oz Silver Proof Coin. Now available, our third coin release of The East India Company Masterpiece Collection originally designed by the famous English engraver William Wyon in partnership with William Dyce shown highlighting the designs exquisite detail.

We are proud to release this 2022 recreation of the beautiful Masterpiece Gothic Crown design on gold and silver coins. The obverse side of each coin features the portrait of Queen Elizabeth II (Jody Clark) commonwealth design. William Wyon is widely regarded as one of history's great coin designers.

Born in Birmingham, England in 1795, he took the position of Assistant Engraver at The Royal Mint in 1816. His career flourished and in 1828 he was appointed Chief Engraver. His reputation is forever linked to the reign of Queen Victoria, producing portraits which followed her journey from a 13-year-old princess to a dignified head of state, including the Neo-Gothic portrait that graces the obverse of the 1847 Crown. Reverse designer William Dyce, primarily a painter, was one of the forefathers of art education. In 1837 he moved from Edinburgh, where he was in charge of the School of Design, to London to become head of the new Government School of Design, which later became the Royal College of Art. In 1844 he was appointed Professor of Fine Art at King's College London, before collaborating with William Wyon on what is now recognised as one of the most artistically significant coins of the 19th Century; the'Gothic Crown'. 2022 Masterpiece Gothic Crown 1oz Silver Proof. This item is in the category "Coins & Paper Money\Bullion\Silver\Coins". The seller is "shinypreciousmetals" and is located in this country: US. This item can be shipped to United States.
americanfirst75threversesilvercoinproofpresaledesignermintworld2019-sanniversarypf69mexicoeditiontypepr70ultraniuecameolabelcoinseagledcampf70royalouncedollarlibertadlimitedgoldcanadaenhancedpcgs