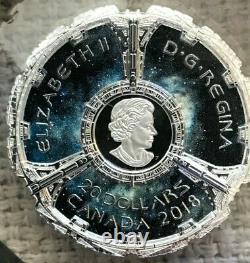 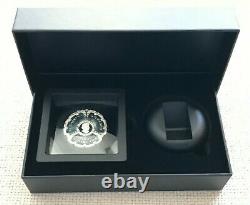 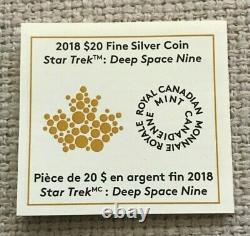 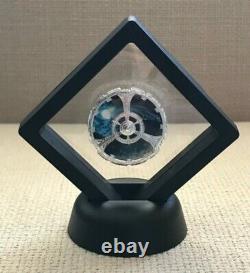 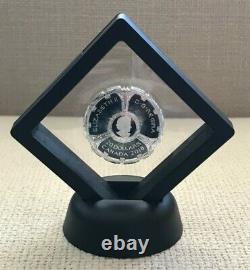 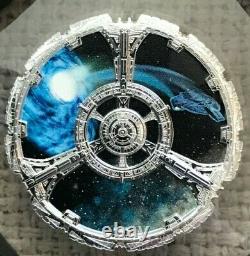 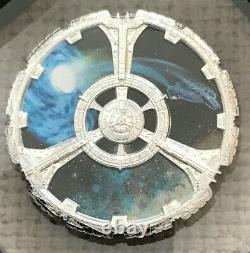 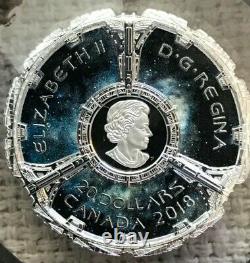 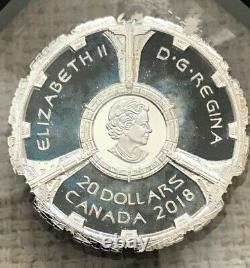 9999 Fine Silver - Only 4,500 Minted! This coin was created by the Royal Canadian Mint to commemorate the 25th Anniversary of the Star Trek: Deep Space Nine television series. This coin contains 0.98 troy oz of.

Only 4,500 of this coin were minted by the Royal Canadian Mint. This coin comes with all of it's original government packaging, including a plastic coin display stand, along with a certificate of authenticity.

The coin is in gem proof condition. The storage box, display stand and certificate of authenticity are in like new condition.

The outer protective plastic sleeve for the storage box has shelf-wear. Please see the listing to view the actual coin and its packaging up for sale.

All photos are of the same coin, taken at different lighting angles in order to best show the highly reflective surfaces of this coin and to best convey the coin's overall condition. Since that time, it has been lovingly stored in a smoke and pet-free home.

Celebrating 25 years of Star Trek: Deep Space Nine, this special collectible is the latest addition to the continuing tribute to the pop culture phenomenon that is Star Trek, whose spirit of exploration and innovation continues to inspire millions. From Gul Dukat's machinations to the Dominion War, Star Trek: Deep Space NineT set itself apart with season-spanning story arcs and character-driven plots that resonated with Canadian fans. The sci-fi series' eponymous space station gives shape to this 25th anniversary celebration, which mixes color and engraving to provide an out-of-this-world view of the series' galactic setting. Coin is encapsulated and is featured inside a ready-to-display floating frame.

Mintage of 4,500 coins. Obverse: A different view of the series' galactic locale is featured on the obverse, where a fine color outline augments the engraved legend.

The space station is also engraved on the obverse, where it frames the effigy of Her Majesty Queen Elizabeth II by Susanna Blunt. Reverse: Within the coin's uniquely shaped contour, the reverse design features a highly detailed, engraved rendering of the space station from Star Trek: Deep Space NineT. Officially classified by Starfleet as a "hybrid planar-columnar tri-radial structure, " Deep Space 9's shape is defined in part by an outer docking ring that lines the coin's edge, which is punctuated by 12 docking ports and a series of thrusters.

Another defining feature, the towering docking pylons extend towards an inner habitat ring, which is linked to a spherical-shaped central core. The station's placement allows for a largely unobstructed view of the full-color image that fills the field, where the Bajoran wormhole (top left) adds a bright swirl of color to the snapshot of the Bajoran system. A different view of the series' galactic locale is featured on the obverse, where a fine color outline augments the engraved legend. Guaranteed by the Royal Canadian Mint.

If you are not fully satisfied with any item, for any reason, simply return it to us. This item is in the category "Coins & Paper Money\Coins: Canada\Commemorative".

The seller is "jjwsales" and is located in this country: US. This item can be shipped to United States.