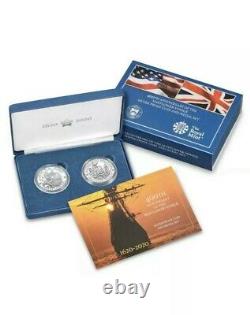 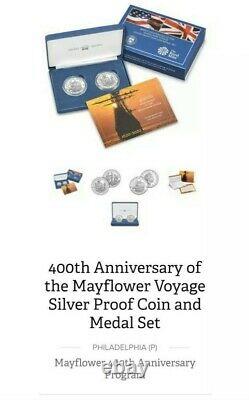 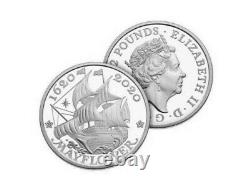 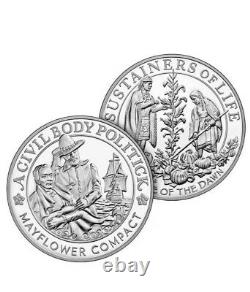 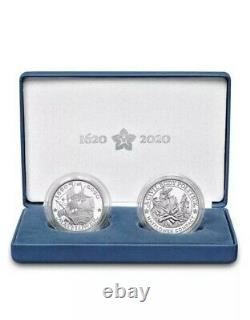 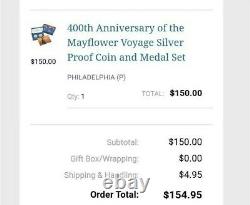 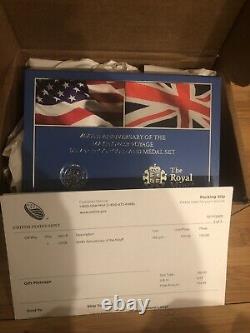 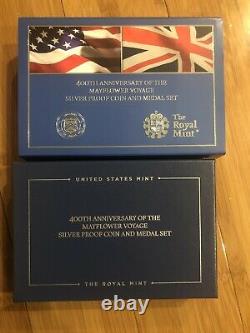 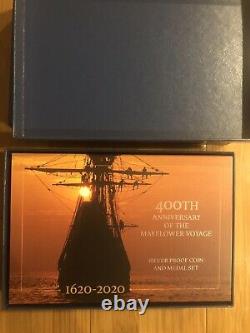 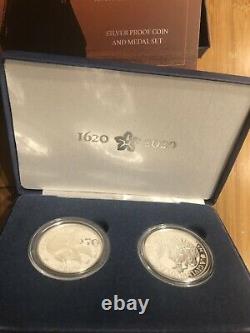 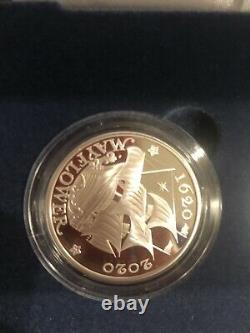 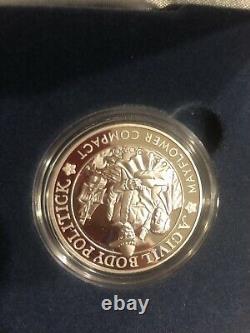 First American-British pairing of a medal and silver coin in the same set. The joint 400th Anniversary of the Mayflower Voyage Silver Proof Coin and Medal Set from the United States Mint and The Royal Mint features an exquisite one-ounce silver coin and medal with designs telling the complex narrative of the Mayflowers journey from the American and British historical viewpoints. The two world-renowned mints close collaboration in producing this unique set reflects the importance of the Mayflower voyages milestone anniversary to both countries. It also marks the first American-British pairing of a silver coin and medal in the same set, powerful numismatic symbols of the countries special and enduring relationship.

The dual sets silver medal and coin are artfully crafted to present both nations perspectives of the Mayflower voyage and its history, lending a deeper and richer context. The United States Mints 400th Anniversary of the Mayflower Voyage Silver Proof Medal and the reverse of The Royal Mints Silver Proof Coin feature similarly styled designs, all by United States Mint Artistic Infusion Program artist Chris Costello. A pair of mayflower blossoms flank the design.

The United States Mint silver medal reverse depicts a Wampanoag man and woman employing a planting technique used to grow several crops that were staples for the Wampanoag people. This method helped keep the soil healthy, maintaining the resources for annual plantings and successful harvests.

The inscription SUSTAINERS OF LIFE recalls not only this sustainable planting technique but the critical skills the Wampanoag people afforded the Pilgrims by teaching them how to successfully plant and harvest the land. The additional inscription is PEOPLE OF THE DAWN.

The Royal Mint silver coin obverse features the fifth definitive coinage portrait of Her Majesty The Queen. Created by Jody Clark, it has appeared on U.

Coins since its introduction in 2015. The Royal Mint silver coin reverse depicts the Mayflower almost bursting out of the frame as it sails through the rough seas. The design features the inscriptions 1620, 2020, and MAYFLOWER in commemoration of the 400th anniversary. The coin and medal for this set are encapsulated and enclosed in a cadet blue presentation case. The year 1620, a mayflower blossom, and 2020 appear on the inside lid of the presentation case. They are secured in an outer packaging of similar color. An outer sleeve decorated with the U.

This item is in the category "Coins & Paper Money\Coins\ US\Proof Sets". The seller is "gabben5733" and is located in New York, New York. This item can be shipped to United States.