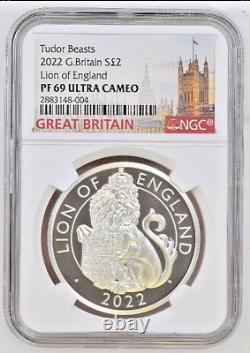 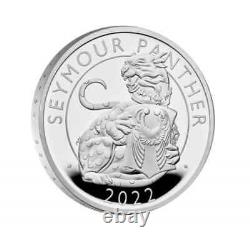 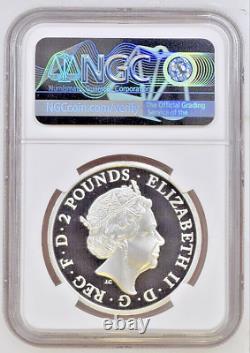 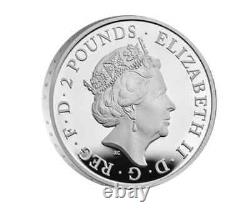 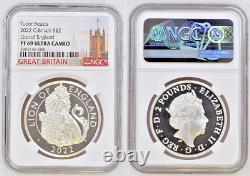 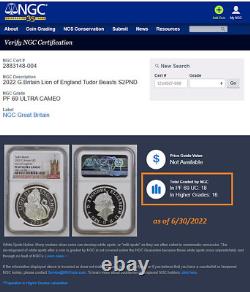 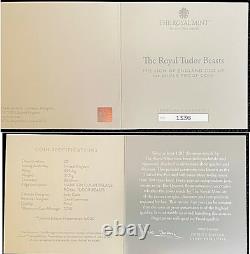 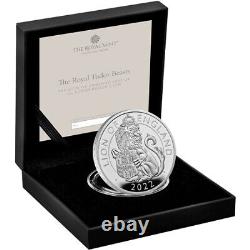 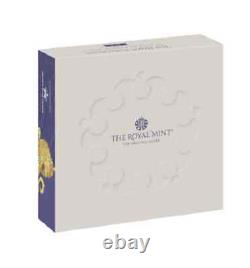 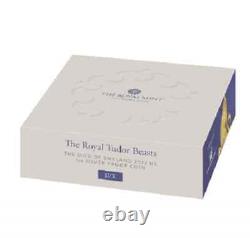 This is the Second Coin in the Tudor Beasts Series/Collection - coin #2 of 10 in series (I/X). NGC upgraded Great Britain label with Scratch-Resistant holders. T he co in you see in the pictures (non-stock images, Cert# 2883148-004). Is one of the PF69UC coins that I. The edge of coin (outermost ring) is stamped with this inscription: "HAMPTON COURT PALACE". This affirms The Royal Mint's very advanced minting capabilities. This coin also (reportedly) has certain security attributes to help hinder.

Effigy of Her Majesty Queen Elizabeth II and the monetary denomination. A design from David Lawrence. Mighty Lion of England, the primary heraldic beast throughout English history, supporting the combined arms of King Henry VIII and Jane Seymour on a shield. Sovereign coin backed by the British government. I bought these coins new, sent them into NGC for certification, and received them back from NGC recently.

The new Tudor Beasts Series from the Royal Mint celebrates another collection of heraldic beasts plucked from the history of the English crown. Specifically, this series focuses on the heraldic beasts of the Tudor Dynasty that ruled the crown from 1485 to 1603. Proof design in the Tudor Beasts Series! Limited mintage of only 6,000 coins! Contains 1 Troy oz of. Bears a face value of 2 Pound sterling (GBP) backed by the government of Britain. Queen Elizabeth II on the obverse. Lion of England on the reverse. The coins are come with a black Royal Mint presentation box.

The coin and display box arrive in a themed shipper, full OGP, with a Certificate of Authenticity included. These proof specimens have frosted designs and mirrored fields. The new Tudor Beasts Series is a focused follow-up collection to the previous Queens Beast Series. This collection (Tudor Beasts of England) has ten planned designs that depict the heraldic beasts displayed on Moat Bridge at Hampden Court Palace. This was the primary residence of King Henry VIII and the statues along the bridge reflect Henry VIIs reign while married to his third wife, Jane Seymour.

Queen Elizabeth II features on the obverse of 2022 Proof British Silver Tudor Beasts Lion of England Coins. Her Majesty is shown here in right-profile relief wearing the George IV State Diadem Crown on her head. Elizabeth II is the longest-reigning monarch in British history and celebrates his record-setting Platinum Jubilee in 2022. In the reverse design of 2022 1 oz Proof Silver Tudor Beasts Lion of England Coins, the Royal Mint features a design from David Lawrence. This image shows the mighty Lion of England, the primary heraldic beast throughout English history, supporting the combined arms of King Henry VIII and Jane Seymour on a shield.

All Presentation Packaging (full OGP, COA, packaging). The Royal Tudor Beasts The Lion of England 2022 UK 1oz Silver Proof Coin. Celebrate a powerful dynasty and the symbols that conveyed its might. The only individual edition of the Lion of England coin to feature an edge inscription. It reads:'HAMPTON COURT PALACE · ROYAL TUDOR BEASTS.

Features the Lion of England - the king of the Royal Beasts. The reverse was designed by the illustrator David Lawrence. Contains one ounce of 999 fine silver.

Struck to Proof standard - the finest finish produced by The Royal Mint. Created in collaboration with the experts at Historic Royal Palaces.