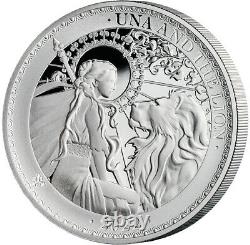 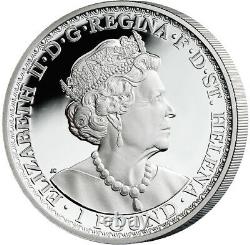 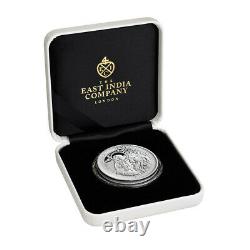 Saint Helena is a small island in the South Atlantic Ocean which is part of the British overseas territory of Saint Helena, Ascension and Tristan da Cunha. The currency of the island is the Saint Helena pound, fixed at parity with the pound sterling. The Mint says about this coin: Each year, The East India Company's celebrated Una and the Lion series invites the world's great coin designers to re-imagine the ancient legend and give the story of heroic Una and her devoted companion the Lion a fresh, contemporary twist.

Their story has been retold for 2022 by designer Glyn Davies. His elegant, determined Una and powerful but poised lion sit facing each other, staring deeply into each others eyes as they ponder the next step on their quest, seeming to communicate their thoughts, hopes and fears through their held gaze. His design captures all the grace, courage and trust of the original story of this brave princess and the mighty beast at her side.

This strictly limited-edition Silver Proof 1oz coin is presented in a bespoke case, every detail of Glyn Davies' design carefully reproduced using a combination of traditional hand craftsmanship and the best of modern minting techniques. The legend of Una and the Lion dates back to the 16th Century and Edmund Spencer's epic medieval poem, The Faerie Queene. Una is a beautiful princess on a quest to rescue her parents from a dragon who has imprisoned them in a tower. She encounters a fierce lion whose rage is subdued as he is captivated by Una's beauty and innocence. He becomes her faithful companion, forever by her side, protecting her from harm.

The relationship between Una and the Lion and the great coin designers began with the 1839 five-pound piece, produced to mark the first anniversary of the coronation of Queen Victoria. It featured a bold neoclassical design by William Wyon, whose Una and the Lion symbolised the young Queen Victoria harnessing the power of the mighty British nation, represented by the Lion. It is now recognised as one of history's most beautiful coin designs, a legacy which continues with the East India Company's annual Una and the Lion Collection. The obverse of the coin depicts the crowned old bust of Queen Elizabeth II facing right, wearing the Royal Diamond Diadem crown worn for her Coronation (effigy known as the "Fifth Portrait" worldwide but "Sixth Portrait" in Australia, where the Queen's portrait by Vladimir Gottwald was fifth).

The Queen also wears the Coronation Necklace; originally made for Queen Victoria in 1858, it was also worn at the coronations (as Queen's Consort) of Queen Alexandra in 1902, Queen Mary in 1911 and Queen Elizabeth (the Queen mother) in 1937. Unlike on British coinage, the effigy is "uncouped" (includes the Queen's shoulders) and extends almost to the rim of the coin; consequently, the legend does not run continuously around the rim.

The artist's initials JC (for Jody Clark) are in tiny letters below left. Around the effigy is the monarch's legend and the date: ELIZABETH II · D · G · REGINA · F · D · ST.

HELENA · 1 POUND ·. Translated from Latin: Elizabeth the Second, by the Grace of God, Queen, Defender of the Faith, Saint Helena. The reverse of the coin shows mythical heroine Una together with the lion; they sit facing each other and looking into each other's eyes. Around above right, the inscription · UNA AND THE LION · ; around below, the date of issue · 2022 ·.

Below left in the rim, the EIC mint mark of the East India Company; the letters are separated by arrows radiating from the centre around which they are situated. Coin Name: 2022 Una & the Lion 1oz Silver Proof coin. This item is in the category "Coins & Paper Money\Bullion\Silver\Coins". The seller is "shinypreciousmetals" and is located in this country: US. This item can be shipped to United States.