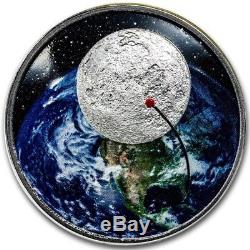 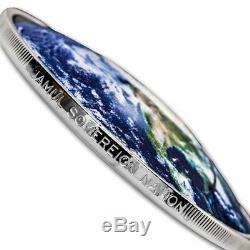 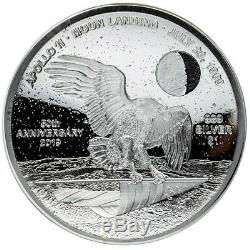 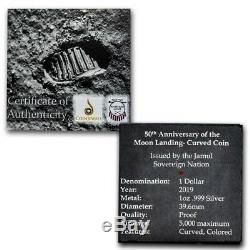 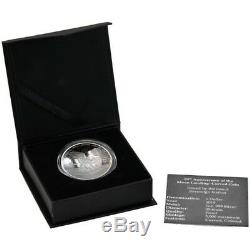 DESCRIPTION The 50th anniversary of the Apollo Program that landed a dozen Americans on the moon between July 1969 and December 1972. NASA unveiled an official logo for use in observing these milestone anniversaries Friday at the Kennedy Center for the Performing Arts in Washington. The unveiling was part of NSO Pops: Space, the Next Frontier, a National Symphony Orchestra celebration of NASAs 60 years of accomplishment. The Apollo 50th anniversary logo is available for download from the NASA Images and Video Library. Created by NASA graphic artist Matthew Skeins, the logo offers a nod to the past with a few elements borrowed from the original program emblem, and a glimpse into the future with a graphic depiction of NASAs vision for the next half-century of deep space exploration. The arc through the word Apollo represents Earths limb, or horizon, as seen from a spacecraft. It serves as a reminder of how the first views of Earth from the Moon one of NASAs crowning achievements -- forever transformed the way we see ourselves as human beings. It also affirms NASAs intention to continue pushing the boundaries of knowledge and delivering on the promise of American ingenuity and leadership in space. The original Apollo emblem, adopted by the program in 1965, used drawings of the Moon and Earth linked by a double trajectory to portray President John F. Kennedys goal of putting a man on the moon and returning him safely to the earth by the end of the 1960s.

In a similar fashion, the Apollo 50th anniversary logo describes a contemporary goal, with images of the Moon and Mars filling the first and second Os, respectively, and the phrase Next Giant Leap beneath the word Apollo. Neil Armstrong declared his first step onto the lunar surface from the ladder of the Eagle lander on July 20, 1969, to be one small step for a man, one giant leap for mankind. Today, NASA is working to return astronauts to the Moon to test technologies and techniques for the next giant leaps challenging missions to Mars and other destinations in deep space. The original emblem was a composite design derived from the ideas of NASA employees and contractor personnel.

It featured the constellation Orion overlaid on a capital letter A. The constellation was positioned so that its three central stars formed the bar in the initial for Apollo. In the 50th anniversary logo, elements of the same star field recall the collective effort of some 400,000 people who worked on the Apollo Program an 11-year series of 33 spaceflights including six that reached the lunar surface. The three central stars are repositioned diagonally beside 50 to emphasize the many sacrifices made in pursuit of the lunar goal -- especially the lives of Apollo 1 astronauts Virgil Gus Grissom, Ed White and Roger Chaffee who perished in a capsule fire during a test on the launch pad in January 1967. SPECIFICATION Country: Year: 2019 Metal: Silver Purity.

The item "2019 1 Oz PROOF Silver APOLLO 11 50th ANNIV. OF THE MOON LANDING Curved Coin" is in sale since Tuesday, November 20, 2018. This item is in the category "Coins & Paper Money\Coins\ World\Australia & Oceania\Other Oceania Coins". The seller is "luispapi1983" and is located in Absecon, New Jersey.