2015 Back to the Future Delorean 1oz Silver Proof Coin 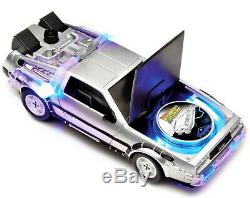 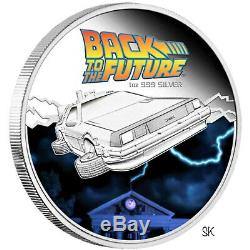 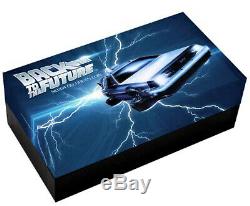 Fox as Marty McFly, a high school student who accidentally travels 30 years into the past to 1955, jeopardising his own future existence. Proof Quality 99.9% Pure Silver.

The reverse of the coin features an image of the DeLorean DMC-12 sports car from Back to the Future surrounded by lightning bolts, with the Hill Valley Courthouse in the background. The inscription BACK TO THE FUTURE , and the coins weight and fineness also appear in the design. Issued as legal tender under the authority of the Government of Tuvalu, the Ian Rank-Broadley effigy of Her Majesty Queen Elizabeth II, the monetary denomination, and the 2015 year-date, are shown on the coins obverse. Limited release of only 7,500 of the Back to the Future 2015 1oz Silver Proof Coins.

The coin is presented in a replica model car designed to look like a DeLorean DMC-12 sports car. The hood of the car pops up to reveal the coin, while the wheels fold under, ready for flight. The car also lights up with a blue light surround. Packaged within an illustrated shipper and accompanied by a numbered Certificate of Authenticity.

(Batteries removed if sent international). The 2020 2 oz License Plate coin is also available under separate listing. The item "2015 Back to the Future Delorean 1oz Silver Proof Coin" is in sale since Wednesday, July 8, 2020.

This item is in the category "Coins\Bullion\Silver\Coins & Rounds". The seller is "silver_kev" and is located in Mirrabooka, Western Australia. This item can be shipped to Australia, United States, United Kingdom, Japan, Germany, France.