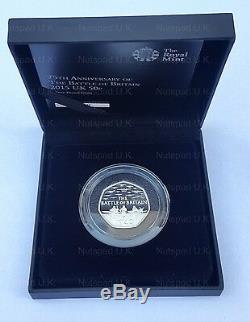 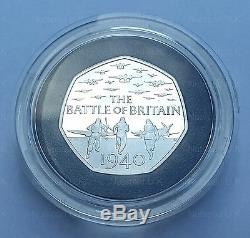 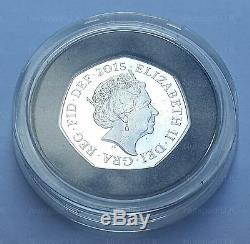 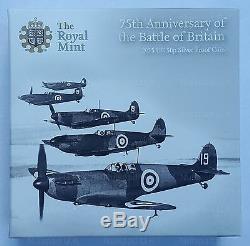 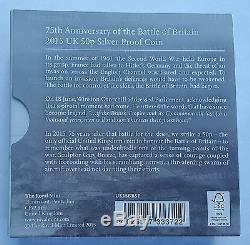 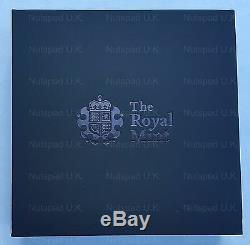 75th Anniversary of the Battle of Britain 2015 UK 50p Silver Proof Coin. 2015 SILVER Proof coin from the royal mint. Honouring those who fought for control of the skies 75 years ago.

In the summer of 1940 Britain faced the threat of invasion. It would fall to brave young pilots and their crews to protect the countrys defences the Battle of Britain had begun. It was their finest hour who can imagine the world today if they had failed in their task? Now, 75 years later, we honour the few with a commemorative 50p, the only official United Kingdom coin to be struck for this anniversary, and one of the first with the new portrait of Her Majesty The Queen. The pilots who fought in the Battle of Britain flew aircraft that pushed the boundaries of technology, they fought an enemy that was equally skilled to preserve the freedom of so many.

They were the glorious few who fought in one of the pivotal battles of the Second World War. The Britain we know today owes so much to those kings of the air in 1940. In 2015 we mark the 75th anniversary of the Battle of Britain with a commemorative 50p the only official United Kingdom coin to honour this important anniversary. The design, by sculptor Gary Breeze, is a poignant reminder of those dangerous days airmen scramble, never turning back, despite the gathering storm ahead and the heavy losses suffered on both sides. Your coin is struck in 925 sterling silver to our finest Proof quality, highlighting every detail of the design.

Only 4000 will be issued in this limited-edition presentation, complete with Certificate of Authenticity and an absorbing booklet on the stories of the Battle of Britain. On 18 June 1940 Winston Churchill addressed Parliament, acknowledging that a pivotal moment had come. He uttered the words that have since become legend, if the British Empire and its Commonwealth last for a thousand years, men will still say: This was their finest hour. The brave and skilful young pilots and their crews who took part in the Battle of Britain suffered losses, of aircraft and of men on both sides, but Britain prevailed it was indeed their finest hour. In 2015, 75 years after that battle for the skies, we strike a 50p the only official United Kingdom coin to honour the Battle of Britain to remember what was undoubtedly one of the turning points of the war. The coin has a design by sculptor Gary Breeze, who has so cleverly captured a sense of courage coupled with foreboding with his scrambling airmen, a threatening swarm of aircraft overhead not daunting their efforts. Produced by the Proof Coin Division of the Royal Mint. Issue Limit up to a maximum of only 4,200 made. The item "2015 50p Silver Proof Coin 75th Anniversary of the Battle of Britain UK 50p" is in sale since Thursday, October 6, 2016. This item is in the category "Coins\Coins\British\Proof Sets/Coins\2000s".